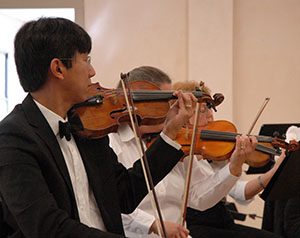 Fredericksburg Community Orchestras announces the 2018 Van der Stucken Festival. This year’s festival will be held March 24, 2018 at 7:30 p.m. at the Fredericksburg United Methodist Church located at 1800 N. Llano St. in Fredericksburg, TX. The festival will be featuring a full symphonic orchestra. Local musicians will combine with players from the Angelo State Symphony Orchestra. Fagner Rocha, professor of violin at Angelo State University, will conduct the orchestra. Theresa Britt will be concertmaster for this performance. There are no tickets for this event, but a suggested donation of $10 at the door would be appreciated to cover the costs of this event.

In addition to featuring a full symphonic orchestra, the ensemble will perform a symphonic piece entitled Idyll that was written by Fredericksburg’s native son, Frank Van der Stucken. The orchestra has commissioned the transcription of parts of the piece by Brazilian Composer and arranger Luann Vega. It is a time consuming job to transcribe parts from the score for an entire work, but the commission of this project will allow the Fredericksburg Community Orchestras to offer these parts to other groups wanting to perform this work by Van der Stucken.

Other pieces to be included on the concert the Hungarian March from the Damnation of Faust by Hector Berlioz, the first movement of Mozart’s Symphony No. 41 “Jupiter”, Valse by Tchaikovsky, Rites of Tamburo by Robert W. Smith. September Van der Stoel will sing Ombra Mai Fu” by Handel and a song composed by Van der Stucken with the orchestra.

For the past three years, Fagner Rocha and Theresa Britt have cooperated to bring excellent live classical music to Fredericksburg. They were friends in college and studied violin in the studio of Kirsten Yon at Texas Tech University. Their friendship has remained strong and contributed to some great music making in the Hill Country. In 2015, Fagner the Bach Double concerto for violins with his wife Emilee Hall-Rocha and FCO in Fredericksburg. In 2016, they joined the orchestra again to play the Haydn Concerto for violin. Last year, during Fagner’s first year as the Director of the Symphony at Angelo State, Fagner brought his Angelo State University chamber orchestra to perform with FCO.

The Van der Stucken Festival was established in 1991 by Friends of Van der Stucken and Kenn Knopp to increase appreciation for the life and work of composer and conductor Frank Van der Stucken, who was born in Fredericksburg in 1858 to parents who had immigrated from Belgium. In Kenn’s honor, the Fredericksburg Community Orchestras has continued three tradition of honoring this Fredericksburg-born composer. Van der Stucken returned to Antwerp, Belgium in his youth and studied music at the Royal Conservatory of Antwerp. He later returned to the United States and conducted the Arion Mannerchor in New York City. In his later career he started the now world renown Cincinnati Symphony Orchestra and the conservatory in Cincinnati.

If you are interested in helping by volunteering for the event, hosting a student from the University on Saturday evening, or sponsoring the event, please contact Theresa Britt at (806) 549-2483.